Fox has always been one of the style aficionados of bicycling.

Between the shiny gold of Kashima and the crisp orange and black logo of their namesake’s tail, the company’s products are usually as high-aesthetic as they are high-performance.

It’s a reputation that made their first dip into the dropper seatpost market a little surprising. In a dropper post market where function didn’t always equal durability, Fox’s mechanical, externally routed, three-fixed-position D.O.S.S. was a benchmark for reliability. But it also stood out for its weight, clunky appearance and awkward remote lever. The D.O.S.S. did the job, but was—like a celebrity having a bad hair day—fashionably out of character for Fox.

Fox’s second generation dropper, the Transfer, is designed to fix that in style. Thanks to a nitrogen-sprung hydraulic cartridge, the Transfer is infinitely adjustable and comes in two models, both available either internally or externally routed: The Factory version, with a Kashima finish, and the less-expensive, black anodized Performance version. Combined with their redesigned trigger lever and a price point well below similar competitors’ posts, the Transfer is sleek, clean and ready to battle for dropper post supremacy.

So first off, let’s get straight to the most practical difficulty with dropper posts: price. It’s a component that’s notoriously expensive, but with the Factory version of the Transfer coming in at just $314 USD (internal or externally routed), Fox seems aimed to bunny hop that hurdle. After buying the remote lever separately—a good thing, as I’ll explain in a minute—the total cost for Fox’s top-end setup is just under $380, significantly less than other, similar-level posts. If you prefer black to gold, the price for the Transfer Performance setup drops to $330, the Kashima coating being the only difference between the two. That’s about as wallet-friendly a dropper post can get.

One of the most ungainly parts of the D.O.S.S. was the ponderous remote lever, a necessary evil considering the leverage required to actuate the mechanical post. Thanks to the hydraulic internals, that is no longer an issue on the Transfer, and as a result the newly redesigned lever is beautifully sleek, while still firmly gripping the handlebars. The lever is also purchased separately, which allows riders to choose between the 1x or 2x/3x drivetrain versions, both of which are wonderfully compatible which whatever your handlebar setup—not so with dropper levers like the Reverb.

The new lever also has a barrel adjuster, made possible by the fact that the head of the mechanical cable is set at the bottom of the post, meaning you don’t have to worry about cable length during installation—all the excess pops out at the handlebar, and you can just cut it and adjust accordingly. From there, tuck it into the back of the lever and you’re good to go. It’s easy enough to do on the trail.

I do see one negative issue with the lever, though a small one. As many mechanically actuated systems, when the lever is pressed the bare cable is exposed to the elements. This isn’t a big deal in an area without much riding grit, but in muddier or dirtier places it could become a maintenance issue over the long run—especially annoying, as it could lead to having to replace both the cable and the housing.

Moving deeper into the Transfer, Fox has switched up more than just the lever. The Transfer is the company’s first foray into a hydraulic cartridge in their dropper posts, and as with their suspension they have spared no technology. The updated internals now provide for infinite adjustment, a change over the three-position D.O.S.S., and operate as smoothly and solidly as any other top-shelf model in the market. Combined with the one-piece, two-bolt seat mount, the Transfer performs as crisply as it looks, with almost no slack.

But the tech feature most noticeable to the average rider is the self-adjusting pressure relief valve. Most folks who have either ridden in very cold temperatures, or gone on a trip to someplace at high elevation, will have likely noticed their post feeling stiffer and returning to the top more aggressively. This is due to oil pressure build up, which the valve is designed to relieve, and after riding in unusually cold PNW conditions this winter, I will say that it’s not just a gimmick. And if you’re unfortunate enough to land a jump or drop on the seat, it also helps keep the cartridge from blowing up. We don’t encourage testing that feature out, although it’s nice to know it’s there.

For the ambitious home mechanic—or the local shop worker—one annoying aspect of Fox suspension in general has always been the inability to do full services in-house. The nitrogen internals must be sent away to the company, an expensive and somewhat time-consuming process. Like their forks and shocks, this is the same case with the Transfer; although, as with their forks and shocks, it does guarantee a high-end result.

Almost point by point, the Transfer delivers as one of the best droppers on the market, matching if not surpassing many competitors’ performance with a significantly smaller price tag. The D.O.S.S. was always a standard in reliability, and the Transfer lives up to that reputation while fixing the D.O.S.S.’s clunky lever and adding the benefits of a hydraulic cartridge. Installation is simple, so much so that you can pretty much do it on the trail—a definite bonus over hydraulic actuation. The pressure relief valve, which may seem like something the average rider would rarely appreciate, actually does make a difference, a handy feature that accommodates all sorts of environments. And the two-bolt seat mount keeps your saddle straight and level.

Unlike the D.O.S.S., the Transfer lives up to Fox’s sexy image, with a sleek, classy look to match the rest of their suspension line up. Even the most attractive musicians and actors have bad hair days; it happens. But with the Transfer, Fox made sure their dropper post looks as sexy as it performs. 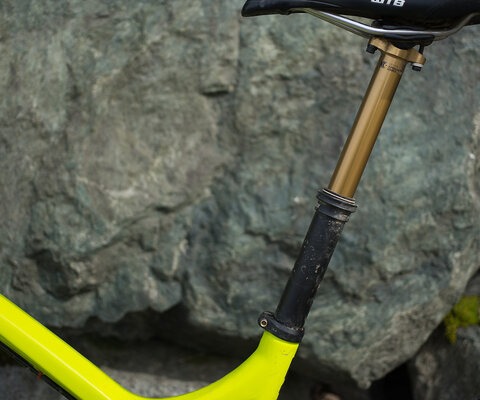